Steve Scott – No Love For The Common Man | ROOTSTIME.BE 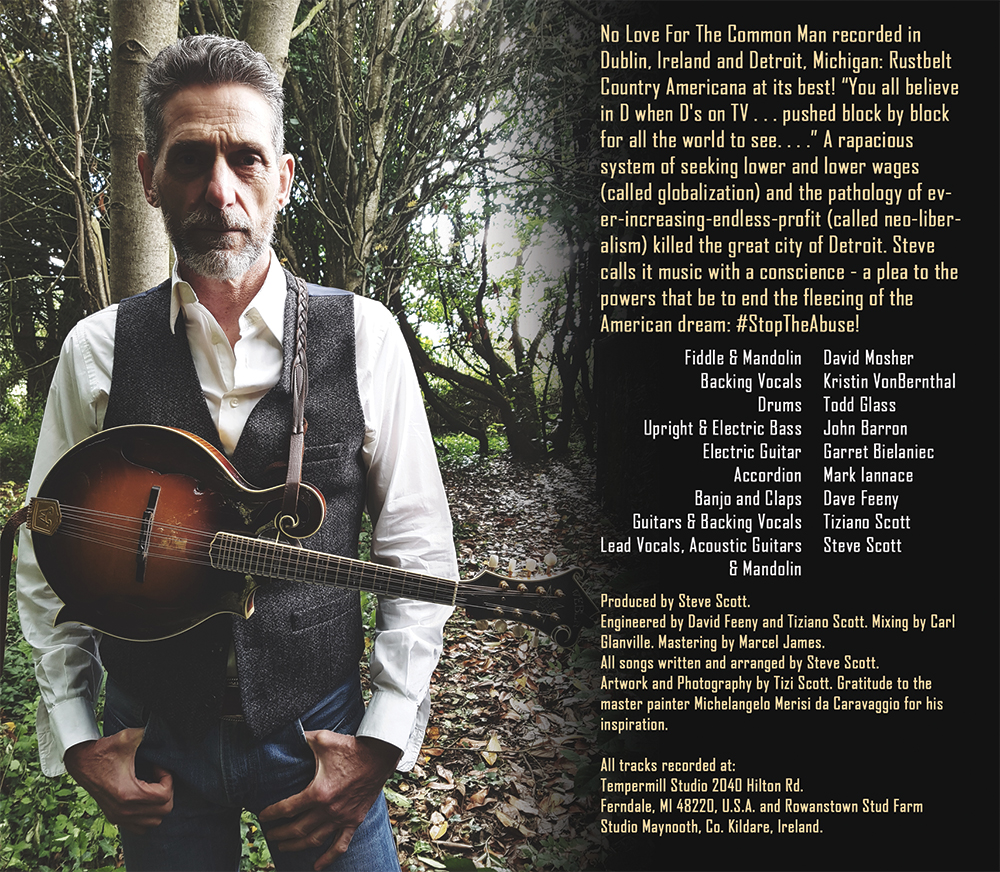 In 2012, the debut album “Shinin’ Like You Do” by American singer [songwriter and producer] Steve Scott from Detroit, Michigan was released. He presented thirteen songs in which rock, bluegrass and country music were integrated in their own unique way. One year later we received a successor here at “Rootstime” in the form of the album “Those Tears I´ve Cried” [with six new tracks including five] of the country rock songs that were also on that debut album [remixed and re-mastered, by Al Sutton of Kid Rock fame].

Many years later in the year 2020 we received his most recent realization in the form of a six-song EP entitled “No Love For The Common Man”, [motivated by] a quote from Noam Chomsky, the American Jewish linguist, philosopher, media critic and political activist. The songs on this album are also inspired by the political, psychological and economic reality of the United States. [Carl Glanville of U2 fame mixed the EP.]

The opening [song] “Rise (Detroit!)” heard on the first track is an ode to the American city that has delivered so much beautiful music to the world, but has now fallen victim to shameless capitalism that has brought down their entire industry. In the song “Wish You Well” that can be heard on the [album’s second] video, Steve Scott talks about the problem of drug addiction and poverty in rural America, which has also affected a large part of the population of [middle America including the] state of Michigan.

Song number three “We Know They Lied” is of course about [an American political system that is] driven by greed and lust for power, and, [that] tolerates racism and inequality between the American people and manages to maintain a corrupt legal system [based on] lies. With that we have had the first three songs of this EP.

Fortunately, Steve Scott has also created space for three simple love songs on this album because love also remains very important in [this] current tough society. Those “love songs” [include] the folky song “Time Waits For No One”, the melancholic “Livin’ On Love” and the album-closing song “I Think About You”.

The six tracks composed by Steve Scott were recorded [in Dublin Ireland and Detroit, Michigan]. He also took on the role of producer. We do not know for sure whether this EP will be the harbinger of a future full-cd, but if so, then you will undoubtedly be able to hear it again in due time via “Rootstime”.